A shirt and a bit of navel gazing

Sorry, this is a bit of a rambling post but I am tired of chasing thoughts around in my own head. I need to share:) So apparently I can’t sew when it’s too hot. Or at least I can only sew very slowly for a short time. Seriously, it is 40 degrees here and it is a slow process actually getting anything made. The sweat drops made the ink run on the pattern pieces as I was cutting out. And don’t talk to me about tearing pattern pieces that have become wet (more sweat) and then stick to your already sticky hands (with yes, more sweat).

I have made a Sutton blouse for both my Mum and my sister but as they are gifts no pics for now. Although I  must say that it is a great pattern for gifts as the fit is quite forgiving, which makes fitting so much easier when you live on different continents. 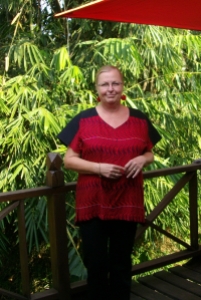 Making these also gave me the opportunity to try the size 16. If you remember, when I made it for myself I was unsure about the sizing and the extra length which I added. So the size 16 is too small. It fits but would need an FBA and the 18 is better anyway I think. But the length of the 16 was also ok (not lengthened). So next time I make it, I will use the straight size 18. So that’s good to know.

I also have a shirt for H which is nearly finished but then I’ve thought it has been nearly finished for several days now. Like I  whined earlier, it’s hard to sew in the heat. I actually cut out two shirts and chose fabrics based on the ability to use the same thread so that I could sew them production line style. We decided on these two; 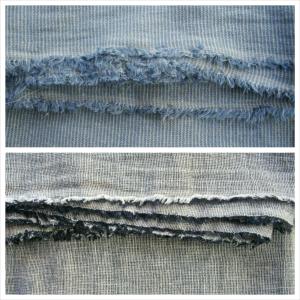 Both gorgeous lightweight, cotton/linen mix. (Yes, there is similar in the shop) H is the understated type so prefers matching topstitching rather than contrast, so cream thread was good for both. From what I’ve read about production sewing, I would have these whipped up in no time. Or not. Apparently, production line sewing doesn’t work for me. Apparently I need the steady sense of accomplishment as each step is completed. Quickly, as in one shirt, not slowly as in two shirts. So now I’m just focused on getting one finished by Friday. It’s our wedding anniversary – 22 years – how is that possible already?

UPDATE: The shirt was finished on time so here it is. 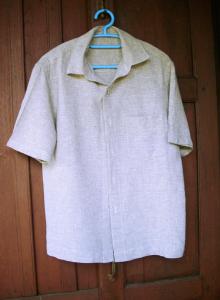 Not much to say about this pattern that I haven’t said before either here or here. I did narrow the collar and stand by 3mm and will hopefully remember to narrow the front placket next time as well. I also used muslin instead of interfacing on the placket, collar and collar stand, and I must admit I will do that again. I really like it. 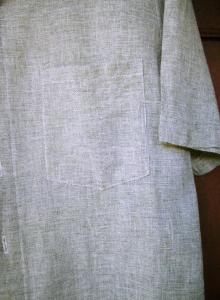 A very invisible pocket and a small glimpse of the sleeve cuff. Not that you can really see it. Because this fabric is nearly identical on both sides, I turned up a narrow cuff and topstitched it down. Perhaps you can see a little more in this photo. 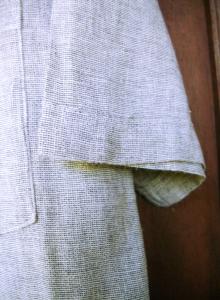 I also changed the centre back pleat to two side pleats. I simply copied a RTW shirt for placement.

As well as not sewing, I have been spending an awful lot of time trying to decide just what I might like to sew for myself. You see I’m at something of a crossroads style wise. It has only just dawned on me, well I’ve had an inkling for a while but it has now completely hit me, that I can make anything I like. I know, for an intelligent woman, I can be awfully slow sometimes:) And then I realised that I am making bog-standard copies of bog-standard RTW because that is what I would otherwise have bought. Absolutely nothing wrong with that. Except that for years my criteria has been

b) suitable for where I was living (The Middle East) or

c) covered the eczema on my arms and legs.

It has literally been years since I have thought about what I would wear if I could wear anything I wanted. And I can now wear anything I want . I’m back in Thailand, but can sew, and I am well. I still have steroid-stomach but most of the other excess weight is gone and no eczema. I repeat, I can now wear anything I want. That is both fantastically liberating and at the same time fantastically terrifying. There are now no excuses. I have to decide what I want to be wearing, how I want to present myself to the world, what look I desire, what impact am I looking to make.

With that in mind I have decided to take my time and actually work out what I want to wear. But then I shall be back with some pretty fabulous sewing. I am determined… no more boring, no more, it’ll do, definitely no more well that’s what everyone’s wearing or making. I’m looking forward to this….

UPDATE: We have finally had some thunderstorms and now it is only 36 or 37 degrees so I am sewing again! And Style Arc are having a 25% off sale until end of April in their Etsy store.  Now I really think I will be back soon with something a little more interesting.

Make sure this account has posts available on instagram.com.